Remember what I wrote about it remaining to be seen if we dodged the “con-crud”? Well, forget all that. We came down with it as expected after all—which is why this missive from the second day wound up being more delayed than I would like. 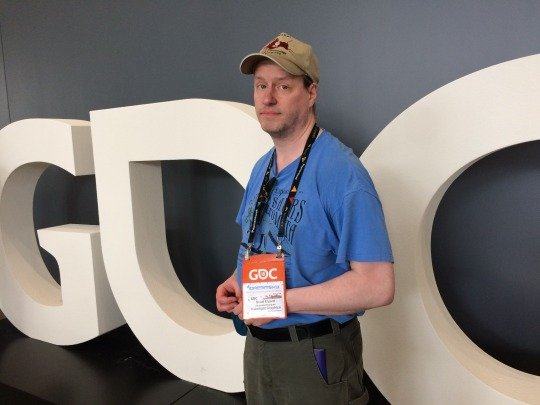 Here I am in Day Two. I look terrible—there’s reasons for that which involve both a general lack of sleep and a surfeit of confusion.

By the end of the second day, trends became apparent, and I’ve had time to reflect on a number of these:

Virtual Reality (VR) was heavily represented here. I’m going to come out and confess that VR is not something I seem to be able to take part in. I suffer from migraines even under ideal conditions, and motion sickness besides. This limits my ability to participate in VR—the one time I tried, I became nearly claustrophobic when the goggles went on, nausea set in very quickly and I had to take the set off. Even Raven can't use most VR headsets for very long—safe to say, neither one of us are within the target audience for this technology.

AR is another matter, since it doesn’t depend on my ability to focus on an image mere centimeters from my eyes. But I think the utility is kind of dependent on a given external environment or other factors, so I, again, I don’t have much to say about AR in general. Most of the cases presented at the conference were little more than tech demos.

While AR seemed a mere afterthought to the conference at large, analytics seemed to be almost an obsession. Knowing what the users of a product are doing with it at all times, aggregating the data to make better choices and create better worlds to play in, &c. Much of this would be useful for game devs who are engaged in level design, and some cases for analytics were presented with just that in mind.

However, many cases for the use of analytics verged into what I perceived as somewhat invasive territory, and I admit to being uncomfortable with that. One exhibitor offered what they regarded as a compelling use-case for using their service—say, a user hasn’t been playing your game “enough”, and in this case, we'll use the particular developer's example of a week of inactivity for a particular user who tends toward making lots of in-app purchases. Notifications can be automatically generated and sent to the individual user's account - pushed to not only remind a player that the game “misses” them, but to also dangle an extra treat or bit of loot valuable to the gameplay experience to sweeten the deal: come back to the game, and you can have this thing which you might have found by yourself after a few hours on your own.

It’s important to realize that some of these games are being used to sell advertising, and lots of ads being played during the course of gameplay leads to more income for the developer. All well and good. But:

Whatever the developer sets as “not enough time spent in game” is something I see as ultimately arbitrary— perhaps more disturbing to me, however, is now the process is automated. Is a week really too much time away? And would I personally be more inclined to play a game that effectively “nags” me to play it? The implications for the particular developer that we are using as example here also seemed a bit classist to me – users that paid more real world money into the game were obviously targeted with more notifications and enticements to return, which leads to some uncomfortable questions that didn't manifest for us until much later. Were lower-paying or free-to-play users targeted with the same level and quality of loot? What does this ultimately do to game balance?

Obviously, most mobile devices offer some level of granular control of how and even who can hassle the device’s owner, but this shouldn’t be necessary to implement from day one, because it violates a key principle of ownership and how anyone might choose to spend their own time. Would some folk be grateful of the reminder? And choose to accept the digital gift being offered? No doubt. But it’s a little creepy in an industry known for creating compelling and even addicting experiences in the name of having fun in a harmless pastime which then provokes a user’s attention in order to justify selling a few more ads. That this data is then being gathered and monitored I have no doubt, but I think game developers should tread cautiously when presented with such tools, however tempting:

If I seem out of place with my tone here, given that I am at this point certainly (as I have amply established) a relative outsider, consider that most game devs still come from games players. These things struck me as obvious, but as I’ve learned, no industry is 100% infallible when it comes to trends or even groupthink.

Ads seem to be a potentially good way of helping fund a project.

But I don’t really know if there’s a best practice for this. Ads are ads—there’s not much anyone can do to avoid ads, given how pervasive they are in television, magazines, and, recently, movie theaters. Why not in games? So long as information which doesn’t belong to the advertisers isn’t being handed off to third parties, I’ve no objection to ads as a revenue stream.

I will say I prefer to pay for games outright. That seems more sustainable and less susceptible to external factors over the long haul. It also seems like a small company could carve out a comfortable niche doing only games which are available for a small fee.

Some advertising requires a transaction, either a tap/click or other form of interaction either to dismiss the ad or—for those rare occasions when a player might actually want what’s being advertised—click through. Obviously there are entities ready and able to handle those transactions and deliver some sort of fulfillment—whatever it is—on whatever’s being offered. Certainly, groups who do not only ad design but make playable games within ads themselves were represented at GDC. (That latter one is clearly new to me, given the demise of Flash, but considering the ubiquity of JavaScript, maybe it shouldn’t at all.)

Ad Delivery is understandable. Cryptocurrencies, however…

What I don’t understand is the presence of cryptocurrencies (not just one, but I counted four when we went), some of whom represented themselves as an alternative to paying for games outright, possibly in exchange for a little (or more than a little) of a game player’s CPU/GPU time or unused disk space to facilitate mining.

Let me get this out right now: I don’t regard cryptocurrencies as valid economic vehicles, investments, or even valid currencies. Right now, they seem to be digital tulips run amok. I confess to dabbling with a bit of “mining” in the past, but the frustrations associated with cashing out now that the market has become so unstable has only affirmed what I believe about cryptocurrencies. It’s clear that crypto has a lot of black market movements associated with it, and some decidedly unsavory political movements as well as money laundering. It doesn’t matter to me that fiat currency is likely based on nothing tangible, except the agreement of an entire nation or treaty group that is has value, and the militaries that often come with such arrangements—something no cryptocurrency will likely ever have.

So I remain a hard skeptic of cryptocurrencies and all of their attendant industry, which is why it was a surprise to see any cryptocurrency represented at a game design conference.

My reading on this presence is as yet incomplete.