I’m not going to suggest that video games were better in the olden days. They absolutely were not; anyone who thinks that they were is probably legally blind or has closed their mind to reality not damaged by Space War for the Atari VCS. At a certain point, video games didn’t exist. And then once they existed, they were objectively terrible for the most part. Being novel was their only saving grace.

Nostalgia may long for the Atari 2600 era and someone out there might take kickstarters to bring back an Atari home console seriously, but nostalgia cannot change an important point of reality: Atari was a pioneer in a new industry, but it also means blocky-chunky pixels and bad sound on a cathode ray tube delivered via RF cabling and it will never mean anything else.

New Atari console? Neat. Does it come with Combat? 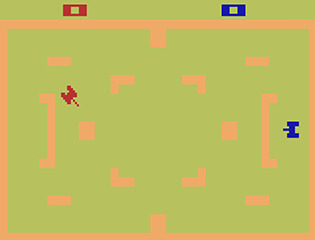 Points are good for determining if there’s a tie.

Maybe that’s harsh. But I doubt most people can name even one non-8-bit era Atari-developed title without googling. It could be that this is simply enough for the sake of nostalgia. It certainly was back in the day, when the Atari logo could generate excitement in millions of 10-year olds. But today? I’m justified in not feeling any excitement at all over any new product bearing their brand.

In being king of an era—1977 to 1982—Atari felt justified in not pushing or developing the state of the technology, so they are now defined only by that state.

From my perspective, there was no successor console, only the Commodore, and later the PC, both of which were rather more defined by rapidly developing technology and art. Atari should have fared better with their home computers since these were generally very good (and certainly better than the DOS clones of the day), but it wasn’t to be. They fell off my radar until television commercials for the Jaguar reminded me Atari had once been a thing.

Of course, consoles hadn’t actually gone away. A little known and today relatively obscure company which had gotten its start making hanafuda cards in the late 19th century had single-handedly revived an industry left for dead by Atari. Oh, and there was also an entire console war I knew absolutely nothing about while I was in college and afterwards.

But my interest in video games was mostly pretty tepid. I generally used computers to do other things: writing, page layout, art, and design. The exceptions are really—well, here’s a complete list for the early 1990s:

These are games I’ve actually played (and omits games I was shown by friends, like Castle Wolfenstein 3D or Wing Commander for PCs). Net Trek was played against other players on the network, but Space Quest III was really the only solo game I can even recall (I even finished it).

Admittedly, my ability and interest in playing tabletop games dropped off during this period. I told myself I had no time for frivolities, I had other priorities, like Jurassic Park, Babylon 5, Mystery Science Theater 3000, doing art in freeware ray tracers, and exploring the potential of SGI machines (then inaccessible to me).

I bought it used for $20 in 1995 from a friend who was dissatisfied with it. But I still encounter folk who try to tell me that Myst isn’t a “real” game. This always prompts me to wonder if they understand what words mean. In being dismissive, they call their own legitimacy into question. If you can’t tell Myst is a real game, what else can’t you do?

Here’s the thing, I’ve never purchased a PC or Mac with the objective of playing games on it. Work always came first, but Myst did make me consider upgrading my workstation to something I could use for something other than pure work—and the extra power would come in handy for more than playing Myst.

So I overshot the minimum specifications and bought my first PowerPC-based Macintosh (replacing the Mac IIvx I acquired the year before).

Aside: I also used the proceeds from selling the older machine to buy my first creative suite: the Graphic Design Studio from Macromedia, which included FreeHand, Fractal Design Painter, bundled with a 12 in. WACOM tablet. (The bundle also came with Pixar MacRenderman [on floppies], MacroModel, and Fontographer. I still have this CD.) Ammonite was a PowerMacintosh 8500/120 with 144 MB of RAM and a single CPU; later I would upgrade it to dual 225 MHz 604e CPUs, 512 MB RAM, and 4 MB VRAM for video work. It was a hassle to upgrade, but I kind of miss it.

My obsession with Myst included researching how it was made and even participating in fan sites to a degree—though this didn’t extend to reading any of the novels based on the franchise, in spite of being an otherwise voracious reader. I think this may have been when my transition to a diet of mostly nonfiction occurred.

Myst satisfied a need I may have neglected from reading novels; this is an easy comparison, but I think it’s easy for a reason. It wasn’t just one other world. It was really six, with distinctly different characteristics, and more than settings. Yes, I was chasing blue or red pages, but I was obliged to wander, take it all in, think about the problem of which young white man I should believe and free from their book-prison.

These environments were loaded with clues. Rooting through their possessions gave you everything you needed to know: trust neither.

Imagine that being the gameplay of Marathon instead of “shoot aliens.” (I had an Atari 2600: I’d already played that game. Doom and whatnot did not interest me in the slightest.) Myst was unlike any of its contemporaries until its sequel and it wasn’t just the novelty that captured me, it was the care invested in making you (the player) feel like you were integral enough to the story that you not only could change its outcome, but that you should. The environments had both character and characterization, and that was where the participatory motivation emerged. Myst immersed you into the story.

Growing up a Navy brat, feeling isolated and displaced was normal. Myst mitigated that in ways that even today I find surprising, given that at its core, the game is an elaborate slideshow of 3D renders.

I should possibly add that I was, throughout my life, “trapped” on islands: Aquidneck, Antigua, Honshu, and Adak. Being on an island can induce introspection. (You also learn about walking. Or bicycling.)

I moved in 1996, from Alaska to Washington, with a short stay in Seattle to look for a job. Seattle was the third largest city I could recall ever ever being in (after Seoul and Tokyo), but I was staying with friends, and I tried very hard to find work. Meanwhile, friends did their best to enlighten me by showing me a game on the then relatively new PlayStation: Oddworld.

Its look made a gradual, but significant, impact. It took a while, but once I completed my move and found work, I was finally in a position to look at electronic games again.