In each of the recaps, you may have noticed I haven’t mentioned Nintendo.

Because of the PlayStation, I have Nintendo. (And pretty much only because of Sony.)

That may require unpacking a bit. Back to 1985.

Japan, at the Seiyu store in Fusa (one of a chain of department stores and supermarkets), my parents are shopping off base. I drift over to a television display set up near (if memory serves, and it may not) wristwatches.

There’s a game console there: the Famicom, running Super Mario Bros. I’ve nothing better to do, so I pick up the controller, and play the only few minutes of Super Mario Bros I’ve ever played. I play through two lives, and after dying a couple of times, I put the controller down, critical of the lack of a joystick, even if the graphics are much better than the Atari VCS, more in line with the Commodore 64, in fact. But the joystick thing is more significant: I could use Atari’s controllers with the Commodore.

That may require unpacking a bit. Back ahead to 1997.

I’ve just bought my first PlayStation, memory card, and two games to go with it: Spyro the Dragon, and Klonoa: Door to Phantomile. I didn’t buy it for me, but my parents had opened a new internet cafe in Alaska, and I thought a video game console would be a suitable attraction for bringing in paying customers. I was going to send it north.

I had my own chance to play, too, and well, yeah. The next day I bought another copy of Spyro, another PlayStation, and sent that north instead.

The PlayStation basically became my favorite toy. I finally picked up a copy of Oddworld: Abe’s Oddysee, but the game didn’t support the analog sticks on the controller, and I found the PlayStation’s biggest flaw.

Well, there’s a thing, a huge point: I prefer using the joystick. I can use a d-pad if it’s absolutely necessary—and I fully concede Nintendo’s innovation here—but the Sony PlayStation controller has never had one out of the box, opting for a grouping of buttons which are really not good for directional movement or diagonals or, well, you get the picture. It’s not a big deal if every game supports the analog stick, but playing Oddworld without one then was arduous and irritating, so I eventually picked up a clear purple aftermarket controller for the console for just the one game. Oddworld became the second game I had to go out of my way to buy hardware for in order to play (or the first if you don’t count hardware which would primarily be used for creative purposes).

Even so, of the three first games I picked up for this console, I would wind up only eventually finishing Spyro. But I had returned to being a console gamer. But also, in 1997, Riven was about to drop, and that would absorb all of my game playing time until I completed it. I think I even finished Spyro several months after Riven.

How can I talk about Riven? To date, I think it’s one of the best experiences I’ve had in an electronic game. Does it have flaws? No. No, it does not.

I remember 1997 as being … stressful. In 1996 I lost a job at a Kinko’s in a town an hour away by bus, and chose to focus on a temp job closer to me instead, which even prompted a friend to ask if that was wise (it was—they hired me full time in 1998).

But the then and now had me working at a telephone directory doing ads, on a night shift. Not the worst job I’d ever had, but I didn’t enjoy it or dealing with the day crew, who seemed to regard the entire shift as an inconvenience intruding on their personal workspace while they were at home. That company no longer exists.

Don’t cross me, companies. I’ll save my money, get hired elsewhere, and a few years later you’ll be sold to a Canadian company and then you’ll cease to exist and I’ll have had nothing to do with that fate. Boom.

By 1996, I was pushing on my personal projects, and was able to purchase my first SGI and a license of LightWave 3D for it. Paradoxides was an SGI Indigo with 128 MB of RAM and a 1 GB hard drive. With a 100 MHz R4000 CPU, it ran rings around Ammonite, but both would be essential. 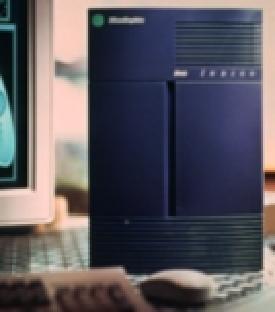 Aside: I remember looking into a Pentium-based PC boxes as an alternate. But my tests showed that for 3D, they ran very slowly, and this is the era where 3D rendering is slow enough as it was. The PC and the Mac weren’t up to it yet.

I had Ammonite and Paradoxides working fairly well together, and I was producing geometry and texture maps in my spare time. I was even entertaining ideas of producing educational software for the PlayStation, based purely on its use of optical media and the fact that the console used the same CPU family as the SGI (albeit far slower and older).

But if Riven had any downside, it killed our project. Conceptually, they were similar enough that I felt there was no competing with Riven as a product. Also, let’s be honest, I had no project management skills and, if I had had them, I would have been able to determine I was too under-equipped, under-funded, and under-staffed to produce a viable product as it was envisioned.

I still have many of the assets created for “The Shadow City” somewhere, still unused.

But on the upside, Riven is an incredible game, upping everything Myst did to establish itself as great. Myst had puzzles, but Riven had logical obstacles. Myst celebrated books and stories, but Riven was the Story. I was about to enter a world where nothing was written down in English, except for a journal penned by the game’s antagonist Gehn.

There’s a gallows Gehn uses for executions. Feeds people he finds problematic to big, scary fishes. Typical dictator stuff. But he also teaches the children of this world to count in D’ni (and you, the stranger, too), using a toylike version of the gallows. (There’s no avoiding this. You need to know the numerals in order to proceed. It’s awesome.) The toy man is lowered to his toy death one tick at a time, by the number on the base. Gehn inculcates the idea that rebellion is punishable by death even to children in a schoolroom.

I’m fascinated by World Building. The alternate natural history, language, and feelings evoked by these things can make you feel like you’ve visited a country where no one speaks your language, where you are illiterate, where the plants and animals are not necessarily harmless, and this echoes my experience living in a place like Japan. Tolkien is the most famous world builder (and certainly few went to the same lengths as he), but I was also keen on Lovecraft, Jack Vance, Clark Ashton Smith, Brian Froud, Wayne Barlowe, Gary Gygax, Peter Dickinson, Fritz Leiber, and others.

Riven was even more fuel for this interest. In a sense, it was nearly an ultimate realization of world-building: the designers at Cyan had to make everything, requiring an incredible attention to detail; visual, architectural, geological, natural, philological, and aural.

It broadened my own mind about what games could be like.

Where was I? Oh, right. That maker of hanafuda cards. I’m getting to that, but I want to talk about displays first.